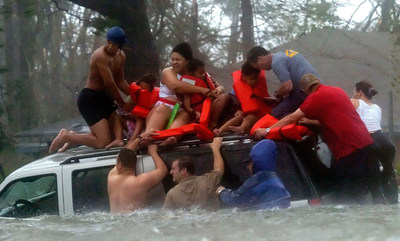 C Spire already provides free Wireless Priority Service, a companion service that gives eligible emergency response agencies and personnel a higher priority voice connection to its mobile communications network during a crisis or natural disaster. To apply or learn more about WPS, go to the Department of Homeland Security.

"In an emergency situation, essential voice and data communications are critical for public safety and emergency responders who need to get through as fast as possible," said Brian Caraway, general manager of C Spire's wireless division, noting that hurricanes, flooding and tornadoes cause billions of dollars in damage, injuries and deaths every year in the Southeast.

The official federal outlook calls for an above average season of up to 20 tropical storms (wind speeds of 39 mph or higher), 6 to 10 hurricanes (74 mph or higher) and three to five major hurricanes (111 mph or higher winds) forming in the Atlantic Ocean during the six-month period that officially began on June 1.

2020 was a record year in the Atlantic with 30 named storms and 14 hurricanes, seven of which were considered major, including Laura, whose 150-mile-per-hour winds battered Louisiana and produced 77 fatalities and $19 billion in damages. Six other major hurricanes killed 296 people and caused $26.5 billion in damages.

While this year is expected to be above average for hurricanes, even lower threat years have produced catastrophic impacts on communities.  In 2015, the remnants of Hurricane Joaquin dumped 24 inches of rain in South Carolina and caused over $1 billion in damages.  Earlier, the Category 4 hurricane with 155 mph winds sunk the U.S. container ship El Fargo near the Bahamas, drowning all 33 crew members on board.

Caraway said it is critical for first responders to be able to communicate during emergencies.  "We want to support emergency responders by making these important voice and data resources available and affordable for cities, counties and state entities responsible for protecting the public during times of crisis or natural disaster," he added.

"We have a track record of service and innovation that is unmatched when it comes to meeting the critical needs of first responders," Caraway said, recalling that C Spire made extensive preparations and network investments in 2005 to withstand Hurricane Katrina, which caused significant destruction and loss of life in New Orleans and along the Mississippi Gulf Coast.

C Spire has continued to leverage its investment in critical broadband infrastructure in its response to the Louisville tornado in 2014 and by providing critical high-capacity wireless broadband connections in 2017 to emergency services personnel responding to the U.S. Marine Corps KC-130 aircraft crash in rural Leflore County.

About C Spire
C Spire is a privately-held, diversified telecommunications and technology services company driven to deliver the best experiences in wireless, fiber internet, and business IT solutions such as internet, VoIP, cloud and managed services.  Read more news releases and announcements at cspire.com/news.  For more information, visit cspire.com or find us on Facebook, Twitter or Instagram.