LAUREL, Miss., Feb. 18, 2022 /PRNewswire/ -- The Mississippi Top 50 inducted Joe F. Sanderson Jr. into its Hall of Fame yesterday with the fifth class of most influential Mississippians. Sanderson joins only 10 other Mississippians who have been inducted into the organization's hall of fame, including three former Mississippi governors. 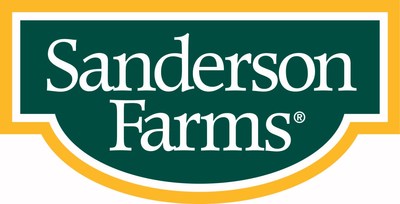 "Recognizing the most influential Mississippians every year helps to spotlight what is right with Mississippi, celebrating the people who are the key to providing leadership as we reach for what our great state can and should be for us all," said Alan Lange, publisher of Y'all Politics.

Raised in a family with a strong entrepreneurial vision and a passion for creating opportunity for many Mississippians, Sanderson has dedicated his career to promoting his state's economy by growing a business that began as a family-owned feed and seed store in Laurel, Mississippi to the nation's third largest poultry producer. As chairman of the board of directors and chief executive officer of Sanderson Farms, he has been an integral part of his family's business, leading it to new heights of success as a publicly-held company focused on the production, processing and marketing of chicken products with last year's revenues totaling $4.8 billion.

A life-long Mississippian, Sanderson is a graduate of Laurel High School and Millsaps College. In 1969, he joined the company his grandfather, D.R. Sanderson, had founded in 1947 that is now known as Sanderson Farms, where he would serve in various roles and leadership capacities over the next five decades. As the third generation of the Sanderson family to lead the company, he invested heavily in future growth by expanding existing operations and constructing eight new state-of-the-art poultry complexes over a period of more than two decades. Today, the company's operations include 12 processing facilities, 11 hatcheries, nine feed mills and one further processing facility spanning the states of Mississippi, Louisiana, Texas, Georgia and North Carolina.

In addition to ensuring the state's economic vitality by leading the only Fortune 1000 company headquartered in the state, Sanderson has contributed his time, expertise and support in numerous ways for residents of the Magnolia State, including serving as chairman for the Governor's Restart Mississippi Commission in 2020 and vice chairman of the Governor's Commission on Recovery, Rebuilding and Renewal for the Mississippi Gulf Coast following Hurricane Katrina in 2005. He has also served as a trustee for Millsaps College, the Laurel School District and the Mississippi chapter of the Nature Conservancy.

For Sanderson, giving back to his community and state is fundamental to the company's philosophy for corporate responsibility. From company-wide volunteer hours in the community to donations of poultry products and millions of dollars to charitable organizations, it is clear "the Sanderson way" that was established by company founders over 75 years ago is alive and well in the company today.

Most notably, the poultry producer serves as title sponsor of the Sanderson Farms Championship, an annual PGA TOUR event and the state of Mississippi's only professional sporting event, which has had a charitable impact on the state of over $14.7 million since 2013. However, Sanderson did not simply stop there, he and his wife, Kathy, assumed the responsibility of serving as co-chairs of the Campaign for Children's of Mississippi, the tournament's primary charity recipient, and the campaign is now in the final stages of raising $100 million to fund a hospital expansion that has revolutionized pediatric care in the state. The new medical tower at the state's only children's hospital is named the Kathy and Joe Sanderson Tower in honor of the family's personal commitment to create a lasting legacy for children's health care in Mississippi.

"I have lived in Mississippi my entire life, and I wouldn't have it any other way," said Sanderson. "I love this state and the people that make it so special, which is why it is such an honor to join the influential leaders in this hall of fame, many of whom I have looked up to and admired during my career."

With his induction into the Mississippi Top 50 hall of fame, Sanderson is now a member of four state organization's halls including the Mississippi Poultry Hall of Fame, the Mississippi Innovators Hall of Fame and as a Laureate of the Mississippi Business Hall of Fame. The Mississippi Top 50 is an annual list of people who are judged to be the most influential leaders in the state through an open nomination process resulting in over 250 unique nominations in 2021. This bipartisan selection of leaders comes from the ranks of elected and appointed officials, as well as those working in lobbying and government relations, business, media and culture. The awards are presented by Y'all Politics and WJTV, and sponsored by Kinetic Staffing, Mississippi Farm Bureau Federation, Tower Loan and The Payne Group.

Sanderson Farms, Inc., founded in 1947, is engaged in the production, processing, marketing and distribution of fresh and frozen chicken and other prepared food items. Employing more than 17,000 employees in operations spanning five states and 17 different communities, Sanderson Farms is the third largest poultry producer in the United States. As a company, Sanderson Farms is committed to adopting a fresh approach in everything that we do, not only where products are concerned, but companywide as well. Though the company has grown in size, it still adheres to the same hometown values of honesty, integrity and innovation that were established when the Sanderson family founded the company in 1947. For more information about Sanderson Farms, visit www.sandersonfarms.com.